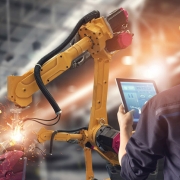 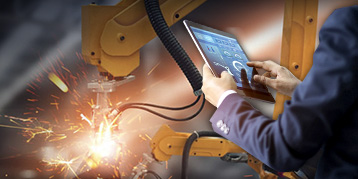 The industrial environment of today is barely recognizable when compared to the assembly lines introduced 100 years ago and then followed by the first introduction of computers and automation 50 years later. Those early steps in the industrial revolution seem quaintly antique compared to the intelligent and flexible facilities that are evolving out of next generation robotics, AI, and machine-to-machine communications. Software and data have been the most obvious drivers of change in Industry 4.0, but solving some significant hardware challenges is now taking center stage. One of those hardware challenges evolves around the creation of robots and robotic systems that are significantly more energy efficient, precise, responsive, and autonomous.

The physical control of robots is gated not only by data and intelligence, but by the capabilities of the motors and motor drives (that harness and control the energy sent to the motor) that power them. Industrial motors are notoriously energy inefficient, wasting 10-30% of the energy they initially consume. Given the ubiquity of motors in the industrial environment with more than 300M of them in the world today, it’s easy to see how small changes could quickly add up to big results both in terms of the business bottom line and in the global pollution impact from the energy industry.

New power semiconductors using GaN technology increase motor and motor drive energy conversion efficiency from 93% (from silicon solutions) to 98%. This translates to a more than 50% reduction in energy lost to heat rather than used as power.

The power conversion and motor drive components of robotic arms are often so large that they are located in separate locations placed a significant distance from the arm on the assembly line. This requires long cumbersome and expensive cables to cover that distance. Because of the way it affects power system size and conversion efficiency, GaN enables the design and creation of significantly smaller (40-60%) motor drives that can be incorporated directly into the robotic arms themselves – eliminating the need for cables. For those applications where external cables are still needed, GaN technology permits the use of longer (if needed), less expensive, unshielded cables. In either case, robotic design can be optimized for the needs of Industry 4.0 – particularly around more flexible use of facility space.

As the need grows for robotics that can independently handle more complex tasks, changes in motors and motor drives will be required along with the computer vision, AI, and machine learning capabilities that software and data deliver. Three important hardware behaviors will be required:

The solution can once again be found in GaN technology. Motor drives created with GaN technology can run at higher operating frequencies and fast switching speeds that can deliver increased motor bandwidth, which in turn enables more precise control in a robot or robotic system.

For mobile robots to work efficiently, flexibly, and without interruption – they need to achieve greater autonomy than they have today. High speed, high power, wireless charging is an important component of this needed evolution. Wireless charging involves a mobile robot parking over, or adjacent to, a charging pad. No human operator is required to make a physical connection within a complex docking mechanism. Since wireless charging stations are physically low profile, they can be placed strategically around a facility to enable maximum uptime in addition to increased autonomy for robots.

An additional benefit of wireless charging is found in industrial environments where wires are not possible or are unsafe (underwater or in mining operations) or when the environment has exposure to dust and debris that can affect the performance of contact-based or wired charging systems that are prone to failure. The Future of Robots and Robotics in Industry 4.0

To move toward realizing the full potential of Industry 4.0, the hardware challenges of energy efficiency, design limitations, performance, and autonomy in robots and robotics must be addressed in new and innovative ways. These challenges are being addressed today with new kinds of power systems using GaN technology.

Other notable career highlights include senior executive positions at Raychem, including General Manager of the Raychem Interconnect Division and Director of Asia Sales & Marketing, based in Japan, for the Raychem Circuit Protection Division. As an Engineering Specialist at General Dynamics’ Space System Division during the eighties, Witham designed fluid systems for the Space Shuttle and was on Mission Control for interplanetary missions. Witham holds an MBA from Harvard and both M.S. and B.S. with distinction in Mechanical Engineering from Stanford.