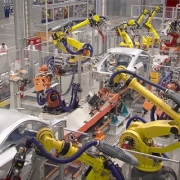 This week 氮化镓系统 (GaN Systems)‘ CEO Jim Witham appeared on the Energy Cast Podcast, a program focused on exciting technology and energy advancements. Listen to it here or on the podcast app of your choice.

I’ll admit, I didn’t really know the difference between microprocessor semiconductors (Intel/AMD) and the power semiconductors developed by this week’s guest. Both models have used silicon and in one case, both are used in data centers.

Ottawa-based 氮化镓系统 (GaN Systems) has developed next-generation power transistors using gallium nitride technology. First developed in the 1990s, GaN transistors helped usher in the LED era when blue LEDs where invented. This is also where Blu-ray players get their name.

GaN semiconductors are notable for their fast-switching capability. According to Jim Witham, our guest and 氮化镓系统 (GaN Systems) CEO, “Fast switching is important because it reduces power loss as it makes things more efficient.”

Read the rest of the blog, and listen to the episode here at energy-cast.com.