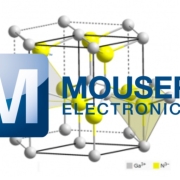 This article was originally published in Radio-Electronics.com on September 16, 2018 by Rudy Ramos at Mouser Electronics.

The electronics industry has a major role to play in helping to save energy, by enabling better equipment and new ways of working and living that that are more efficient and environmentally friendly. Maintaining the pace of technological progress is key, but improvements become both smaller and harder to achieve as each technology matures. We can see this trend in the development of power semiconductors, as device designers seek more complex and expensive ways to reduce switching energy and RDS(ON) against silicon’s natural limitations.

Wide bandgap semiconductors have promised to leapfrog the performance of silicon devices, although practical considerations have delayed their adoption in new product designs. Fortunately, they are beginning to hit their stride, as next-generation devices realize major improvements over their predecessors.

Earlier this year, 氮化镓系统 (GaN Systems) announced the latest generation of its 100V GaN eHEMT series; the GS-010-120-1-T. With its 120A current rating, the new device can handle one-third more current than the earlier 90A version: a significant advance that increases both reliability and the range of applications that can now be addressed.

GaN technology has demonstrated its ability to deliver increases of between 1% and 2% in power-conversion efficiency in equipment such as data center power supplies, electric-vehicle On-Board Chargers (OBC), solar inverters, and industrial motor drives. These apparently small gains translate into noticeable improvements by real-world metrics, such as revenue per data-center rack, EV driving range, or progress towards renewable-energy generation targets.

With next-generation GaN devices entering the market, delivering significant performance gains over their predecessors, growing adoption by volume manufacturers may give the final push needed for the technology to enter the mainstream. GaN is even more likely to become mainstream with the introduction of enablement solutions like the GS61008P-EVBHF buck-converter evaluation board, or the GS665MB-EVB motherboard that can be populated with various half-bridge daughter cards containing 650V GaN transistors.

The evaluation board, or daughter cards for 650V systems, each contain gate-driver ICs (a pSemi PE29101 dual-output on-board the GS61008P-EVBHF, and two Silicon Labs Si8271 ISO driver single-channel drivers on the 650V cards) that are designed to meet the exacting requirements of GaN transistors. The GaN eHEMT gate is voltage controlled, similar to a conventional silicon MOSFET, although a bias of only 5-6V is required to turn the GaN device on. The gate threshold voltage (VGth) is lower than that of a silicon MOSFET, at about 1.5V. Moreover, thanks to their low gate capacitance, GaN turn-on times are about four times faster than silicon MOSFETs with the same RDS(ON), while turn-off time is about twice as fast. However, although the faster turn-on/turn-off helps reduce switching losses, care must be taken to minimize the effects of dV/dt transients and prevent shoot-through currents that waste energy and can potentially damage the transistors.

Each of the gate drivers has separate pull-up/pull-down outputs to allow independent optimization of turn-on and turn-off rise time. Together with the low impedance of the outputs, this helps enhance switching speed and efficiency and minimizes the effects of dV/dt transients. Increasing turn-on gate resistance reduces the slew rate. Hence an optimal resistance allows fast switching for low losses, but should still be high enough to prevent Miller-effect turn-on and avoid gate oscillation. A value between 10-20Ω has been found to be suitable for 氮化镓系统 (GaN Systems)’ 650V transistors, and the accompanying turn-off resistance is 1-2Ω to ensure fast and robust pull-down with minimum impedance.

The PE29101 controlling the GS61008P-EVBHF’s 100V transistors integrates a dead-time generator, which is programmed using two external resistors to control the timing of the low-side and high-side gate signals. On the GS665MB-EVB, PWM signals for the Si8721 drivers are generated using discrete components, and the dead-time adjusted using a pair of potentiometers.

Although it’s important to understand the different gate-drive requirements of these new devices, established best practice should be followed throughout the rest of the circuit. These include optimizing the layout and traces to minimize stray inductances, and positioning drivers as close to transistor gates as possible to minimize external gate-to-drain coupling. Persistent ringing or overshoot can be dealt with by placing ferrite beads in series with the transistor gate, or an R-C snubber circuit across the gate-source path.

The wide bandgap semiconductor era starts here. Products are in the market, and are being proved in real-world applications, and some second-generation parts – like the GS-010-120-1-T — are already with us. Now is an exciting time to start designing with GaN transistors; getting in at the “ground floor” level is an ideal way to learn how to make the most of the improvements expected to come in the future.